Like quite possibly a good proportion of people syndicated on DelphiFeeds.com, I’ve recently acquired a Mac. Being cheap, it’s only a refurbished iMac, but it looks good (and was spotless when taken out of the box).

In terms of first impressions, I’ve found OS X a bit ‘meh’ overall so far. Glancing through a couple Lion reviews (being last year’s model, my iMac only has Snow Leopard) suggests one annoyance (windows only resizable from one corner) has been fixed. Maybe OS X Tiddles will finally add proper, standardised maximise/restore functionality too? Nonetheless, one thing the Mac definitely beats Windows on is the standard console window (‘terminal’) properly supporting Unicode. Here’s a simple test program:

The SetConsoleOutputCP and SetTextCodePage calls are needed since the Windows console doesn’t support Unicode at all by default (as an aside, SetTextCodePage is new to XE2 – before you could only set the default ‘Ansi’ code page globally). Nonetheless, you are still likely to end up with a crap result in Windows-land whatever you do:

On the Mac though, things work fine, and minus the workarounds needed on Windows too: 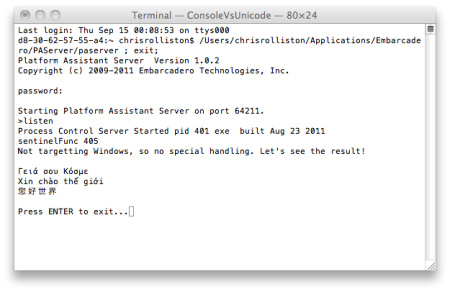