In the Delphi RTL and VCL, a method called LoadFromFile or the like will raise an exception if the file doesn’t exist or is invalid. Similarly, if an object property getter implements a lazy-loading pattern (meaning, the value of the property will only be initialised when first needed), it will raise an exception if the situation is such that nothing valid can be loaded or initialised. This is pretty basic exception programming – when an error arises, the flow of the calling code is forcibly interupted with a clear account of what call was invalid. Imagine if (say) TBitmap.LoadFromFile didn’t raise an exception when the file name passed to it didn’t refer to a valid bitmap file – calling code could go happily on its way assuming a graphic has been loaded when it hasn’t. Likewise, what if the Items property getter for TList<T> just returned nil (or equivalent) with an out of bounds index? If T is a class type, then off-by-one errors in the calling code will end up with cryptic access violations later on that might be nowhere near where the erroneous call was actually made!

Alas, but such basic understanding of exception programming is not grasped by at least one developer on the FMX team. Repeatedly across the XE2, XE3 and now (I learn) XE4 releases, methods that an experienced Delphi programmer would expect to raise an exception when nothing valid can be returned do not. As soon as one case is fixed – e.g., the TFmxObject.Children property getter was done so in XE3, albeit implicitly – another one or two are added, and frankly, it needs to stop now. The latest cases I learn are the HScrollBar and VScrollBar property getters on TScrollBox – done properly in XE3, the anti-pattern has however been introduced in XE4, causing ‘random’ access violations in TMemo (the FMX TMemo inherits from TScrollBox).

I don’t know whether someone has jumped the gun or not, but from a ‘conceptual overview’ and ‘getting started’ POV it’s pretty comprehensive.

It’s not exactly a ‘leak’ given it comes from an official promo video, albeit in Russian, but anyhow, the US pricing for Delphi XE4 has come out: 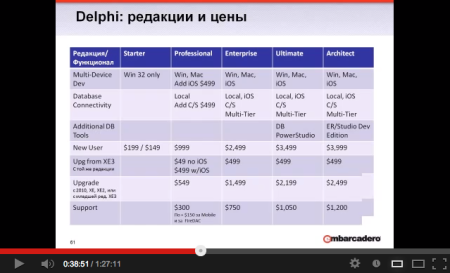 See here (for some reason, the video couldn’t show on Firefox, my usual browser, but it ran fine in Safari). In a nutshell, the XE4 upgrade will be a ‘nominal’ $49 for XE3 Professional edition owners uninterested in iOS support, or $499 if they are. In contrast, the upgrade cost from XE3 for Enterprise and above will be a flat $499. Slightly disappointingly (well, in my view at least), nothing clever has been done with the Starter edition – that remains Win32 only.

Does $499 (I shan’t guess the exchange rate for outside the US) fulfil the promise of iOS support being a ‘low cost add-on’ for XE3 Professional owners? Probably not, and while I’d prefer it lower, I’m not sure it’s particularly expensive for the market either:

Of course, beyond pricing, there is the quality issue to consider too. Put briefly, it’s all very well promising the moon, but if you end up delivering a trip to a boggy field instead, the original promise will backfire. Time will tell…

[PS – I’d forgotten about Software Assurance when I wrote this post (silly!). I’ve no idea how that will be handled. Pure speculation, but maybe XE3 Professional users on SA will get iOS support, but with higher renewal charges kicking in if they want to keep it for later releases…?]

[PPS – Joylon Smith has posted further comments on his blog (link). As there’s no point in fragmenting the discussion, please feel free to comment there, or the thread I started on Embarcadero’s Delphi Non-Technical forum (link), rather than here.]